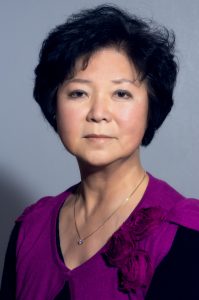 Dancer, choreographer, playwright, executive producer, and entrepreneur, Ann Woo has long been instrumental in introducing Chinese performing arts to the mainstream in the past 35 years. Ms. Woo was the lead dancer and Executive Director of the Chinese Folk Dance Association in San Francisco from 1979 to 1987 and founded Chinese Performing Arts of America (CPAA) in 1991. Ms. Woo has a MSEE degree and worked as an electronic engineer for 30 years with 9 patents in her field. Drawing upon her vast experiences both in performing arts and high-tech industry, CPAA, under Ms. Woo’s management, has grown to a mid-size art institute to serve 25,000 annual audiences in California and 1,000, 000 audiences across the nation in 25 years.

As the creative director, Ms. Woo has created a body of new works with copyrights: Flower Drum Festival in 1992; Drums of Thunder in 1993; Princess Fragrance in 1994; Shangri-La in1995; Sorrow of the Great Wall in 1996; Moon Aloft, 1997, Celestial Dragon in 1998; Dragon King in 1999; Dragon2000 in 2000; Pageant of Drums in 2001; Master & Masterpieces in 2002; The Color of Romance in 2003; Monkey King and the Demon in 2004; Middle Kingdom – Ancient China in 2005; Moon Reflection on Crystal Spring in 2006; Shaolin Kung Fu in 2007, The 12 Zodiacs in 2008; Dream of the Butterfly in 2009; The Flying Peacocks, New Dream of the Butterfly in 2010; When Mama Meets Papa, Silk Road in 2011; Legend of the Dragon King in 2012; Court Dance of Tang Dynasty in 2013; Wind, The Chinese Emperor and the Nightingale in 2014, and Blue-Vase Spirit in 2015; and Silk Road Fantasy, the new creation in 2016. Among these creations, the biggest investment is the Middle Kingdom – Ancient China, a $500,000 joint production with Ballet San Jose, which was praised by dance critics as a seamless integration of ballet and Chinese dance. Ms. Woo has led her company with the flagship production Dances of China – a Journey of 5,000 Years which comprises many CPAA’s original works winning the standing ovation during its national tour including California, Hawaii, Nevada, Florida, Texas, Idaho, Washington State, New York, Massachusetts, Alaska, British of Columbia, and Ontario, to establish CPAA an acclaimed arts company at a national level.

To provide job opportunities to CPAA’s artists, in 2002, Ms. Woo sold her income property to established CPAA Academy in Cupertino to offer art classes. Next year, she resigned from her engineer job and was determined to focus bringing CPAA to a next artistic plateau. In 2008, CPAA moves its headquarters to a 14,000 sq. ft. facility in West San Jose which becomes the home of its own resident artists as well as the CPAA Academy nurturing 4 youth groups: CPAA Youth Dance Group, Silicon Valley International Youth Orchestra, CPAA Children Choir, and CPAA After School. The facility, partitioned into 10 studios and a 35’X30’ stage, also serves as an incubator for other 40 local diverse art groups to teach their arts to 2,500 art enthusiasts every week and also serves as a community center to hold parties, seminars and performances. In 2014, the headquarters was renamed International Performing Arts Center (IPAC.) In the same year, International Arts Council – Silicon Valley was founded to encourage collaborations among art groups to produce multi-culture and multi-discipline programs.

For her outstanding services promoting arts in the community, Ms. Woo was awarded: